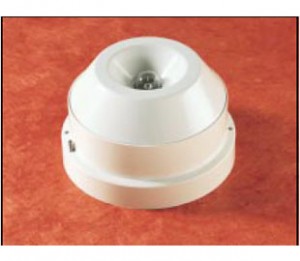 The HF-24 is suited for use wherever there is a need for automatic detection of fires which can develop quickly or where contents have great value. Suggested applications include: • Petroleum Storage • Photographic or Film Storage • Computer Rooms • Print Shops • Museums The HF-24 is not a substitute for smoke or heat detectors, but is an added level of protection against fast flaming fires only. There is no set area for which the HF-24 Ultraviolet Detector is able to cover. The reason is that the size of the fire and the distance from this fire to the detector all effect how the detector will respond. There is one nonvariable, however, and that is very small fires must have a duration of at least 7-15 seconds if within 12 feet, 20-30 seconds at 25 feet. The HF-24 uses an ultraviolet detector tube which absorbs very weak ultraviolet light such as that emitted from a flame. This is detected as a train of discharge pulses creating a current. The electronic circuitry in the detector body translates this action as an alarm signal. There is a counter circuit which prevents the alarm from occurring from one-shot ultraviolet light such as lightning or cosmic flares. Additionally there are circuit refinements which limit the detection of only wave lengths from 1850 to 3000 angstroms thus ignoring visible and infrared light. STANDARD FEATURES: • Detects fast flaming fires • Highly reliable, long life UV receptor tube • Low power consumption • HF-24 can be intermixed with other types of detection on the panel’s detection circuitry • Interchangeable with Hochiki America’s standard smoke and heat detector bases. • Size and color similar to other Hochiki America smoke and heat detectors. • Easily Maintained – cleaning can be accomplished without disassembling the detector. • Not UL Listed